Throughout the Covid-19 pandemic, governments have used data on people’s movements to inform strategies for containing the spread of the virus. In Europe and the United States, for example, contact-tracing apps have used Bluetooth signals in smartphones to alert people when they’ve spent time near app users who have tested positive for Covid-19.

But how can governments make evidence-based decisions in countries where such fine-grained data isn’t available? In recent findings, MIT researchers, in collaboration with Sierra Leone’s government, use cell tower records in Sierra Leone to show that people were traveling less during lockdowns. “When the government implemented novel three-day lockdowns, there was a dual aim to reduce virus spread and also limit social impacts, like increased hunger or food insecurity,” says Professor Lily L. Tsai, MIT Governance Lab’s (MIT GOV/LAB) director and founder. “We wanted to know if shorter lockdowns would be successful.”

The research was conducted by MIT GOV/LAB and MIT’s Civic Data Design Lab (CDDL), in partnership with Sierra Leone’s Directorate for Science, Innovation and Technology (DSTI) and Africell, a wireless service provider. The findings will be published as a chapter in the book “Urban Informatics and Future Cities,” a selection of research submitted to the 2021 Computational Urban Planning and Urban Management conference.

Any time someone’s cellphone sends or receives a text, or makes or receives a call, the nearest cell tower is pinged. The tower collects some data (call-detail records, or CDRs), including the date and time of the event and the phone number. By tracking which towers a certain (anonymized) phone number pings, the researchers could approximately measure how much someone was moving around.

These measurements showed that, on average, people were traveling less during lockdowns than before lockdowns. Professor Sarah Williams, CDDL’s director, says the analysis also revealed frequently traveled routes, which “allow the government to develop region-specific lockdowns.”

While more fine-grained GPS data from smartphones paint a more accurate picture of movement, “there just isn’t a systematic effort in many developing countries to build the infrastructure to collect this data,” says Innocent Ndubuisi-Obi Jr., an MIT GOV/LAB research associate. “In many cases, the closest thing we can use as a proxy for mobility is CDR data.”

Measuring the effectiveness of lockdowns

Sierra Leone’s government imposed the three-day lockdown, which required people stay in their homes, in April 2020. A few days after the lockdown ended, a two-week inter-district travel ban began. “Analysis of aggregated CDRs was the quickest means to understanding mobility prior to and during lockdowns,” says Michala Mackay, DSTI’s director and chief operating officer.

The data MIT and DSTI received was anonymized — an essential part of ensuring the privacy of the individuals whose data was used.

Extracting meaning from the data, though, presented some challenges. Only about 75 percent of adults in Sierra Leone own cellphones, and people sometimes share phones. So the towers pinged by a specific phone might actually represent the movement of several people, and not everyone’s movement will be captured by cell towers.

Furthermore, some districts in Sierra Leone have significantly fewer towers than others. When the data were collected, Falaba, a rural district in the northeast, had only five towers, while over 100 towers were clustered in and around Freetown, the capital. In areas with very few towers, it’s harder to detect changes in how much people are traveling.

Since each district had a unique tower distribution, the researchers looked at each district separately, establishing a baseline for average distance traveled in each district before the lockdowns, then measuring how movement compared to this average during lockdowns. They found that travel to other districts declined in every district, by as much as 72 percent and by as little as 16 percent. Travel within districts also dropped in all but one district. 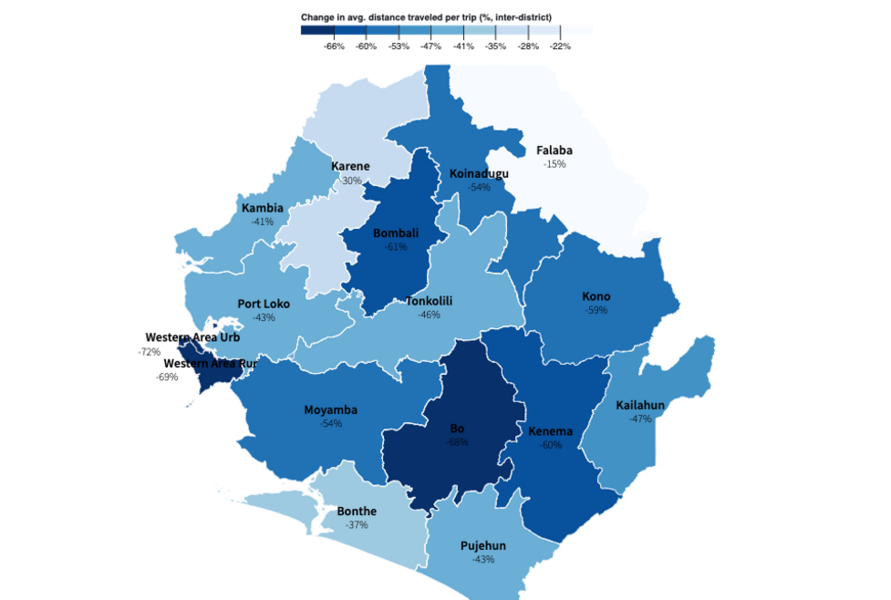 This map shows change in average distance traveled per trip to other districts in Sierra Leone in 2020. Image courtesy of the MIT GOV/LAB and CDDL.

While movement did decline in all districts, the effect was less dramatic in poorer, more sparsely populated areas. This finding was to be expected; other studies have shown that poorer people often can’t afford to comply with lockdowns, since they can’t take time off work or need to travel to get food. Evidence showing how lockdowns are less effective in poorer areas highlights the importance of distributing resources to poorer areas during crises, which could both provide support during a particularly challenging time and make it less costly for people to comply with social distancing measures.

“In low-income communities that demonstrated moderate or low compliance, one of the most common reasons why people left their homes was to search for water,” says Mackay. “A policy takeaway was that lockdowns should only be implemented in extreme cases and for no longer than three days at a time.”

Throughout the project, the researchers collaborated intimately with DSTI. “This meant government officials learned along with the MIT researchers and added crucial local knowledge,” says Williams. “We hope this model can be replicated elsewhere — especially during crises.”

The researchers will be developing an MITx course teaching government officials and MIT students how to collaboratively use CDR data during crises, with a focus on how to do the analysis in a way that protects people’s privacy.

Ndubuisi-Obi Jr. also has led a training on CDR analysis for Sierra Leonean government officials and has written a guide on how policymakers can use CDRs safely and effectively. “Some of these data sets will help us answer really important policy questions, and we have to balance that with the privacy risks,” he says.