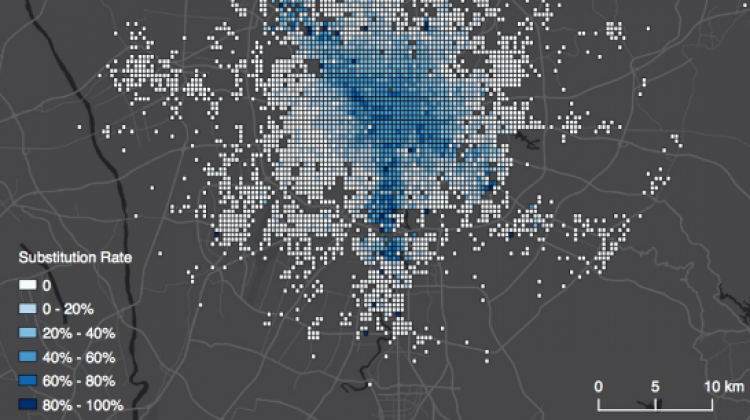 A robust public transit network is an integral part of an urban transportation system. The joint JTL-Transit Lab merges behavioral science and systems engineering to determine how to improve the flow of passengers on mass transit, better understand demand, and offer policy solutions to transit agencies to help them respond to emerging challenges in this space.

How does Ridesourcing Substitute for Public Transit? A geospatial perspective in Chengdu, China

The explosive growth of ridesourcing services has stimulated a debate on whether they represent a net substitute for or a complement to public transit. Among the empirical evidence that supports discussion of the net effect at the city level, analysis at the disaggregated level from a geospatial perspective is lacking. Besides, it remains unexplored the spatiotemporal pattern of ridesourcing's effect on public transit, and the factors that impact the effect. Using DiDi Chuxing data in Chengdu, China, this paper develops a three-level structure to recognize the potential substitution or complementary effects of ridesourcing on public transit. Furthermore, this paper investigates the effects through exploratory spatiotemporal data analysis, and examines the factors influencing the degree of substitution via linear, spatial autoregressive, and zero-inflated beta regression models. The results show that 33.1% of DiDi trips have the potential to substitute for public transit. The substitution rate is higher during the day (8:00–18:00), and the trend follows changes in public transit coverage. The substitution effect is more exhibited in the city center and the areas covered by the subway, while the complementary effect is more exhibited in suburban areas as public transit has poor coverage. Further examination of the factors impacting the relationship indicates that housing price is positively associated with the substitution rate, and distance to the nearest subway station has a negative association with it, while the effects of most built environment factors become insignificant in zero-inflated beta regression. Based on these findings, policy implications are drawn regarding the partnership between transit agencies and ridesourcing companies, the spatial-differentiated policies in the central and suburban areas, and the potential problems in providing ridesourcing service to the economically disadvantaged population.

Passenger contact in public transit (PT) networks can be a key mediate in the spreading of infectious diseases. This paper proposes a time-varying weighted PT encounter network to model the spreading of infectious diseases through the PT systems. Social activity contacts at both local and global levels are also considered. We select the epidemiological characteristics of coronavirus disease 2019 (COVID-19) as a case study along with smart card data from Singapore to illustrate the model at the metropolitan level. A scalable and lightweight theoretical framework is derived to capture the time-varying and heterogeneous network structures, which enables to solve the problem at the whole population level with low computational costs. Different control policies from both the public health side and the transportation side are evaluated. We find that people’s preventative behavior is one of the most effective measures to control the spreading of epidemics. From the transportation side, partial closure of bus routes helps to slow down but cannot fully contain the spreading of epidemics. Identifying “influential passengers” using the smart card data and isolating them at an early stage can also effectively reduce the epidemic spreading.

Worse than Baumol’s Disease: the Implications of Labor Productivity, Contracting Out, and Unionization on Transit Operation Cost

Unit costs measured as bus operating costs per vehicle mile have increased considerably above the inflation rate in recent decades in most transit agencies in the United States. This paper examines the impact of (lack of) productivity growth, union bargaining power, and contracting out on cost escalation. We draw from a 17-year (1997–2014) and a 415-bus transit agency panel with 5780 observations by type of operation (directly operated by the agency or contracted out). We have three main findings: first, the unit cost increase in the transit sector is far worse than what economic theory predicts for industries with low productivity growth. Second, contracting out tends to reduce unit costs, and the results suggest that the costs savings from private operations can be only partly explained by lower wages in the private sector. Interestingly, we find that the cost savings from contracting out are larger when the transit agency also directly operates part of the total transit service. However, while overall unit costs are lower in contracted services, cost growth in large private bus operators is no different than cost growth in large public transit operators. Third, unique transit labor laws that lead to union bargaining power are a likely driver of the unit cost growth above inflation. Overall, these factors reflect inherent characteristics of the bus transit sector, such as the nature of low productivity growth and union legislative power related to the need for public subsidy. They drive increases in both transit fares and public subsidy at rates higher than inflation, and play an important role in the deterioration of transit agencies’ financial sustainability.