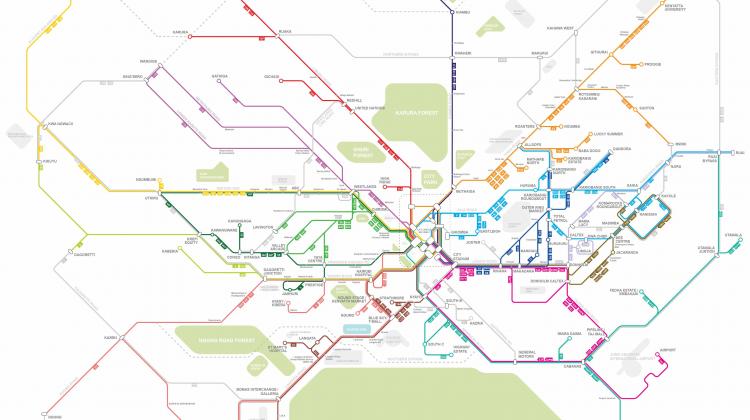 Digital Matatus shows how to leverage the ubiquitous nature of cellphone technology in developing countries to collect data for essential infrastructure, give it out freely and in the process spur innovation and improved services for citizens. Conceived out of collaboration between Kenyan and American universities and the technology sector in Nairobi, this project captured transit data for Nairobi, developed mobile routing applications and designed a new transit map for the city. The data, maps and apps are free and available to the public, transforming the way people navigate and think about their transportation system.

In many of the world's growing cities, semi-formal buses form the basis of public transit systems. However, little open and standardized data exist on these systems. The Digital Matatus project in Nairobi, Kenya set out to test whether the geo-locative capabilities of mobile technology could be used to collect data on a semi-formal transit system and whether that data could be translated into the General Transit Feed Specification (GTFS) data standard for wider use. The results of this work show that mobile technologies, particularly mobile phones, which are increasingly prevalent in developing countries, can indeed be used effectively to collect and deliver data in a modified GTFS format for semi-formal transit. Perhaps more importantly, through our work in Nairobi, we were able to identify the benefits and technical needs for developing data on semi-formal transit. Overall, the work illustrates (1) how the GTFS can be adapted to semi-formal systems and used by other cities with such transit systems, (2) that there is demand from technologists as well as transport communities for comprehensive data on semi-formal transit, (3) that releasing the data openly in the GTFS standard format can help to encourage the development of transportation applications, and (4) that including the entire transit community during the data development can create a community of users and mechanisms for institutionalizing a process of data updating and sharing. The engagement strategies our research team developed around the data collection process in Nairobi became just as important as the resulting data it produced.