Columbus is still honored in 6,000 places across the U.S 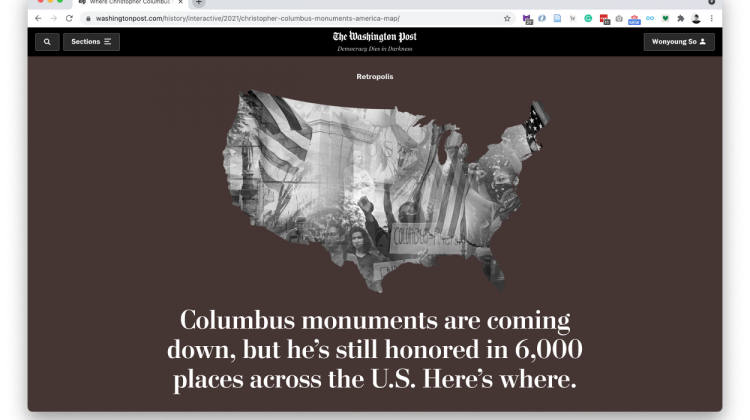 Columbus monuments are coming down, but he’s still honored in 6,000 places across the U.S.

Columbus monuments are coming down, but he’s still honored in 6,000 places across the U.S. Here’s where.

With one quick tug, a 14-foot-tall Carrara marble statue of Christopher Columbus fell, shattering into pieces. The crowd of more than a hundred, gathered in Baltimore’s Little Italy neighborhood, erupted in celebration.

As the sun was setting on the anniversary of the nation’s independence from the British Empire, the statue of a man whose legacy is a reminder of colonialism fell to the bottom of the city’s Inner Harbor.

Earlier that morning, as the sun was rising, Francine Nido in Waterbury, Conn., was awoken by a phone call. “They killed your man,” the voice on the other end said.

Quickly, she made her way to city hall. She was shocked to see the 12-foot granite statue of Columbus vandalized, something she felt was an insult to her Italian heritage.

For Mahtowin Munro, an Indigenous rights activist, these symbols represent historical violence. “Celebrating Columbus is intended to erase us and ultimately is celebrating our genocide,” said Munro, who co-leads the United American Indians of New England.

Nearly a month and a half after the murder of George Floyd, the dismantling of the statues in Baltimore and Waterbury came amid a broader reckoning over whose legacy is commemorated, and why.